Retail sales plunged in March, offering a grim snapshot of the coronavirus outbreak’s effect on consumer spending, as businesses shuttered from coast to coast and wary shoppers restricted their spending.

Total sales, which include retail purchases in stores and online as well as money spent at bars and restaurants, fell 8.7 percent from the previous month, the Commerce Department said Wednesday. The decline was by far the largest in the nearly three decades the government has tracked the data.

Even that bleak figure doesn’t capture the full impact of the sudden economic freeze on the retail industry. Most states didn’t shut down nonessential businesses until late March or early April, meaning data for the current month could be worse still.

“It was a pretty catastrophic drop-off in that back half of the month,” said Sucharita Kodali, a retail analyst at Forrester Research. She said April “may be one of the worst months ever.”

The resulting job losses continue to mount. Best Buy, which has 125,000 employees over all, said Wednesday that it would furlough 51,000 hourly store workers beginning Sunday, including nearly all of its part-time staff.

And in the months ahead, the question is how quickly spending will bounce back once the economy reopens, and how many businesses will survive until then.

People who lose jobs won’t quickly resume spending once businesses reopen. And those willing to spend may be reluctant to congregate in malls, restaurants and other businesses that rely on face-to-face contact.

Michelle Cordeiro Grant, chief executive and founder of Lively, a lingerie brand acquired by Wacoal last year, said it wasn’t clear how customers would want to shop and “what the new culture of shopping in physical retail will be.”

“Do they want to have a different type of fitting-room experience?” she mused. “Do they want our associates to wear masks and to be offered a mask? What is the try-on situation?”

When demand does rebound, it might come too late for some retailers, many of which were struggling even before the pandemic because of changes in mall traffic and a long-term shift to online sales.

The disruptions from the pandemic may ultimately hand more power to retailers able to continue operating stores during the crisis. 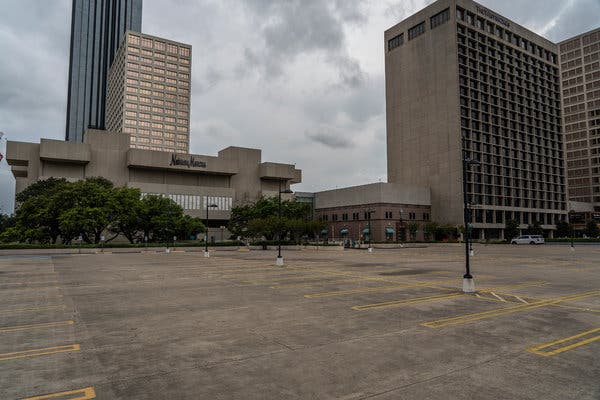 The Galleria, a temporarily closed mall in Houston. Changes in the industry were hurting retailers even before the pandemic. Credit…Go Nakamura for The New York Times