The coronavirus pandemic has brought wave after wave of catastrophic economic data: The worst decline in gross domestic product in a decade. The worst retail sales report on record. The worst week ever for unemployment claims, and then two more twice as bad as that.

But even by those recent standards, the April jobs numbers could stand out.

Economists surveyed by MarketWatch expect the report, which the Labor Department will release on Friday, to show that U.S. payrolls fell by 22 million jobs last month — a decade’s worth of job gains, wiped out in weeks. The payroll processing company ADP said on Wednesday that the private sector lost more than 20 million jobs in April, with the cuts spread across every sector and size of employer.

To put that in perspective: In the worst month of the last recession, the U.S. lost 800,000 jobs. The worst monthly loss on record was nearly two million jobs in September 1945, when the country was demobilizing after World War II. (The population has grown since then, but not enough to account for the difference.)

The April unemployment rate is likely to hit 15 percent or higher, by far the worst since the Great Depression. And the deterioration has happened with almost unfathomable swiftness: Two months earlier, the rate was 3.5 percent, a 50-year low.

“It’s not just the magnitude of these numbers; it’s the speed with which they’re happening that’s really stunning,” said Nick Bunker, who leads North American economic research at the Indeed Hiring Lab.

Friday’s report will paint the clearest picture yet of the economic devastation, and could provide some important hints about the eventual recovery. But it will also bring complications that will make the numbers difficult to interpret.

The numbers will be more complete — but less timely.

It’s no surprise that employers have cut millions of jobs; weekly data on filings for unemployment benefits have tracked the destruction. The most recent report, covering the last full week of April, showed that roughly 30 million Americans had filed jobless claims since the new coronavirus began to shut down the economy. The next weekly report, due Thursday, will probably add millions more.

Those figures are more up to date than the monthly jobs report coming Friday, which will cover hiring and firing through mid-April. But the monthly numbers are more comprehensive than the weekly ones, which almost certainly understate the damage. Not everyone who has lost a job qualifies for benefits, and many who do qualify have not yet filed a claim because the flood of applicants has overwhelmed state unemployment offices.

The monthly data, based on surveys of businesses and households, should provide a more complete estimate of job losses. It will also reflect the extent to which hiring at companies like Amazon and Walmart has offset them. And unlike the weekly data, which mostly counts losses, the monthly report includes data on working hours, which will help quantify the millions of people who have held on to their jobs but had their hours cut.

Friday’s report will also provide the most detailed breakdown yet of job losses by industry. That could help answer a question that could be crucial to the eventual recovery: How far has the damage spread?

The last jobs report, based on data from early March, showed large losses in restaurants, hotels and other industries hit hardest by the first wave of shutdowns. Those cuts were no doubt even larger in April, and the report will also show large losses in retail, which has seen a tidal wave of business closings and bankruptcies.

If the losses are concentrated in sectors that have been directly affected by the virus, that could bode well for the recovery, because it suggests the damage has been contained, at least so far. But if it has spread to industries like finance and professional services, that could suggest a cascade effect is underway, with laid-off workers pulling back on spending, leading to lost revenues and still more layoffs. It could take much longer to climb out of that kind of hole.

The unemployment rate could be misleading.Image 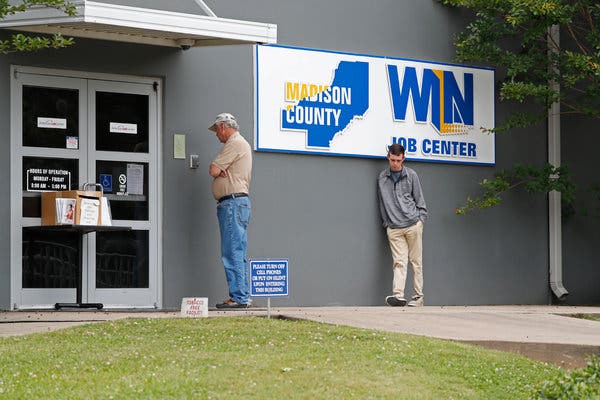 A state agency in Mississippi where workers can file unemployment claims has closed its lobby, but provides information through an intercom.Credit…Rogelio V. Solis/Associated Press